A plantar wart is a benign growth on the sole or toes. Plantar warts are found in about 34% of noncancerous skin lesions. Dermatology deals with the diagnosis and further treatment of such neoplasms. When trying to cure a wart, it is highly undesirable to use folk methods and try to get rid of it yourself, since the plantar wart has a root deep into the skin and its incomplete removal can lead to secondary growth of the wart, or, on the contrary, severely injured surrounding tissues can cause the appearance of neoplasms in the rest of the body. . . 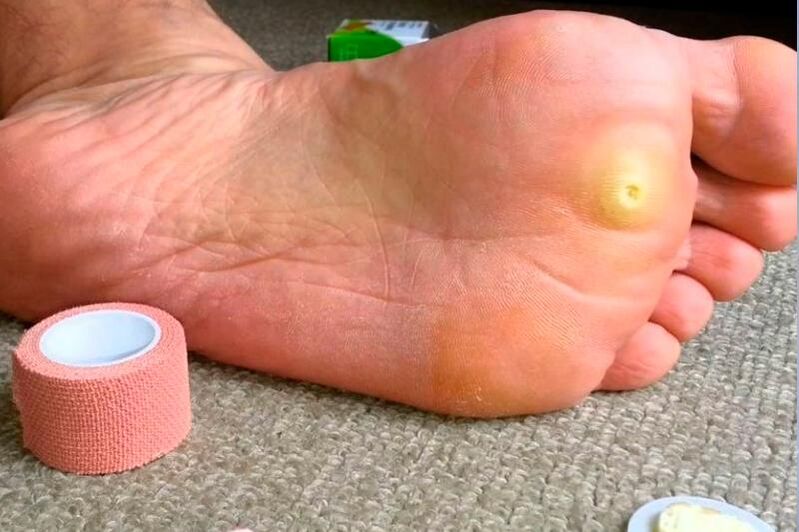 Causes of the plantar wart

Warts, papillomas and other types of warts (plantar, common, filamentous, flat) are formed as a result of infection of the human body with the papilloma virus (HPV). HPV is transmitted among humans by contact (through infected cells). The most favorable environment for the transmission of the virus will be a warm and humid environment. Therefore, people often contract HPV in baths, saunas, swimming pools and gyms. If the body's immunity is strong enough, then HPV can remain in a latent state and not give any clinical manifestations. A failure of the immune system activates the virus and the above formations begin to appear on the skin.

The appearance and development of a plantar wart is facilitated by such factors as excessive dryness or sweating (hyperhidrosis) of the skin of the feet; uncomfortable, squeezing and chafing shoes; various deformities of the foot (deforming osteoarthritis, arthritis of the joints, flat feet); diseases that violate the trophism of the tissues of the foot (atherosclerosis, varicose veins of the lower extremities, diabetes mellitus, etc. ), damage to the surface of the foot.

Often, the plantar wart is round or oval in shape, about 1-2 cm in diameter and protrudes 1-3 mm above the skin. The color of the skin of the plantar wart usually remains unchanged, but sometimes it can be pink or light brown.

The plantar wart in most cases is single. The formation of similar warts may indicate that the virus has reached high activity. Multiple warts give the affected area of the skin a mosaic pattern, which is why they are called "mosaic warts".

Plantar warts may go away on their own. On the skin of the foot under such conditions, they disappear without a trace. However, since warts are often injured, they rarely go away on their own. Even if the neoplasm itself does not cause painful sensations, it can still cause the patient significant discomfort and often even sharp pain caused by pressure or rubbing of the wart on the sole.

Outwardly, a plantar wart often resembles a thickened stratum corneum (hyperkeratosis) or a callus. Only a highly qualified dermatologist can distinguish a wart from corns and hyperkeratosis. For this, the doctor performs a dermatoscopy. In order to investigate the formation better, the dermatologist first scrapes the top layer of the keratinized skin. The absent skin pattern on the surface of the formation and the identified symptoms of petechiae ("thrombosed capillaries") speak in favor of the neoplasm. Positive results for HPV and PCR diagnostics confirm the fact that the patient is infected.

In order to determine the depth of the root of the germinating plantar wart, the patient is prescribed an ultrasound of the skin lesions. However, if there is a suspicion of a poor-quality wart, then the patient should consult a dermato-oncologist. If a disease and deformity of the foot is detected, in this case, it is necessary to consult a podiatrist.

The plantar wart is treated separately from keratoderma of the palms and soles in Reiter's syndrome. Smaller sizes and shapes (flat, not conical) formations, petechiae, or the so-called symptom of "thrombosed capillaries", as well as absent inflammatory changes around the keratinized layers of the epidermis make it possible to distinguish between plantar wart and keratoderma.

Plantar warts also share some common features with palmar-plantar syphilis. Syphilis are multiple in nature, have a specific circular or arcuate arrangement, are painless and have a positive RPR test for syphilis.

Cryodestruction of a wart gives positive results, which directly depend on the qualifications of a specialist, because an excessively deep effect on a neoplasm can lead to scarring, and too superficial exposure can lead to the reappearance of a wart. A blister that appears after treatment with liquid nitrogen at the site of the wart should not be injured until it heals (healing takes about a week).

Laser removal gives the best cosmetic result, since this method makes it possible to adjust the depth of the effect. Laser removal of warts is painless and quick, and healing takes about a few days.

The radio wave method, in which a neoplasm is cut out with a radio knife, can also be used to remove a plantar wart. At the same time, the vessels are cauterized, which prevents the virus from entering the bloodstream from the neoplasm.

Surgical removal is suitable for large plantar warts. The procedure is performed using a conventional scalpel and the use of a local anesthetic. There is a likelihood of complications - this is the occurrence of a scar.

Prevention of the occurrence of a plantar wart

The primary prevention of a plantar wart is to prevent HPV infection. It is worth paying special attention to the mandatory wearing of personal shoes in places such as showers, swimming pools and saunas. A significant role in the prevention of plantar wart formation for people with foot diseases is played by proper and regular foot care: peeling and treatment of feet with emollients, as well as regular pedicure.

Patients suffering from foot deformity should use orthoses, relief sectors, orthopedic insoles. If your feet are sweating a lot, you should use deodorant and drying agents and choose shoes made from natural materials. If the skin of the feet is too dry and has cracks, then in this case it is necessary to use creams that can nourish and moisturize the skin of the feet. You should also regularly do therapeutic foot baths.

Secondary prevention of the occurrence of a plantar wart is that the patient, together with the removal of the wart, is also prescribed antiviral drugs and immunocorrectors.